Here is yet another Halloween approaching us with a lot of scary costumes and fun things to enjoy with. As the day nearing us, developers are in full flow developing the best apps for this Halloween season. Here is ScareCauldron developed by Bit Cauldron, an enticing scary application for this Halloween.

ScareCauldron is a sound mixing application for your Android, which comprises of some horrible soundtracks that users can mix and play. The app is very simple with a single screen giving a hell like ambiance where users can mix various sounds from the top. If you are not interested in own mixing, the app automatically takes a combination of horrible sounds and plays.

ScareCauldron is a nice app for making fun with your friends and family on this Halloween season. The good this is that the app runs on the background even though the screen locks after keeping idle. However, there are very less number of sounds in the free version, but you can go for in-app purchases and get more scary sounds.

There is a button that allows you to mix (pause sounds) and haunt (play sounds) as you wish. I personally felt that the app seems very much battery consuming if it is playing on the backdrop for a while. The sounds are placed as images on the top that users can simply drag and drop into the pot for mixing. As the app is targeted on making fun with your loved ones, it is sad to see that there are no options available to share these sounds either via email or any other social networking sites! 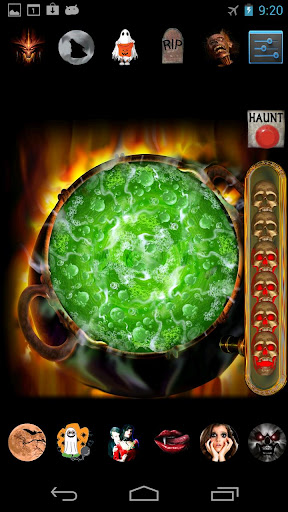 Some more options like recording voices are these sounds would be a nice addition on this app. ScareCauldron needs a lot of improvements in terms of the added features, but it shines as a seasonal app for this Halloween season.

ScareCauldron is available on the Google Play for FREE of cost!

Editor at WhatsmyApp, pure Apple fanboy, I have an iPhone 4S, iPhone 4, the New iPad, iPad 2. Catch me at chris [at] whatsmyapp.com